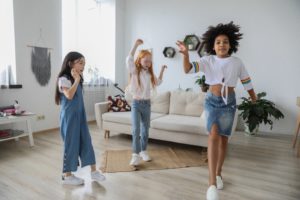 A Note About Progressive Classes: As the name suggests this is a progressive class where the instruction imparted evolves from one class to the next and builds upon the content already covered. When you book this class, you will be booked for the entire semester.  We require that students commit to and attend all classes. This a spring semester class so it runs on its designated day and time from March 1st to May 31th.

Come explore Hip Hop and street dance in our exhilarating class that will teach kids the basics of the dance form in a fun and engaging way.