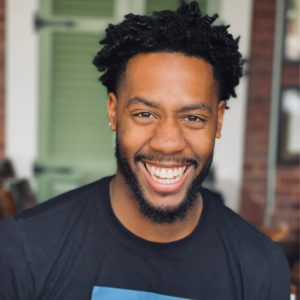 Ashton D. Jones, a proud native of Tulsa, OK, is a talented pianist, choral conductor and lyric baritone. Ashton has most recently appeared as a member and soloist with the Jason Max Ferdinand Singers on the "Live from London" Voces8 platform. As an opera singer, he has appeared as Monsieur Pandolf from Massenet's Cendrillon, Masetto from Mozart's Don Giovanni, and Bluff from Mozart's The Impresario, amongst other roles. Ashton has also performed with the Houston Ebony Opera Guild Chorus and Houston Symphony Grassroots Chorus. As an educator and music teacher, Ashton has taught private piano and voice lessons to children and adults of all ages. Mr. Jones has also taught high school and middle school choir. Jones currently serves as the Assistant Conductor and Coordinator of the COGIC Chorale, of the International Music Dept. of the Church of God in Christ, the Vocal Assistant at Olathe North High School, and the Artistic Director of the Voices of Hartford.

Mr. Jones earned the Bachelor of Arts in Music, vocal performance from Texas Southern University (TSU). His principal instructors were Dr. Jolie Rocke, voice, and Dr. Lucian Zidaru, piano. During his tenure at TSU, Ashton held positions as student conductor and student accompanist for both the TSU concert choir and opera workshop. Mr. Jones earned the Master of Music degree in vocal performance from the Manhattan School of Music, where he studied with Professor Ruth Golden.

Ashton is currently attending the University of Missouri-Kansas City, serving as a Graduate Conductor in pursuits of a second Master of Music degree in choral conducting and the Doctor of Musical Arts in vocal performance

Please Note: Both Age Groups (if applicable) will follow the same class plan structure and content. The content delivery will  be tailored to the age group.